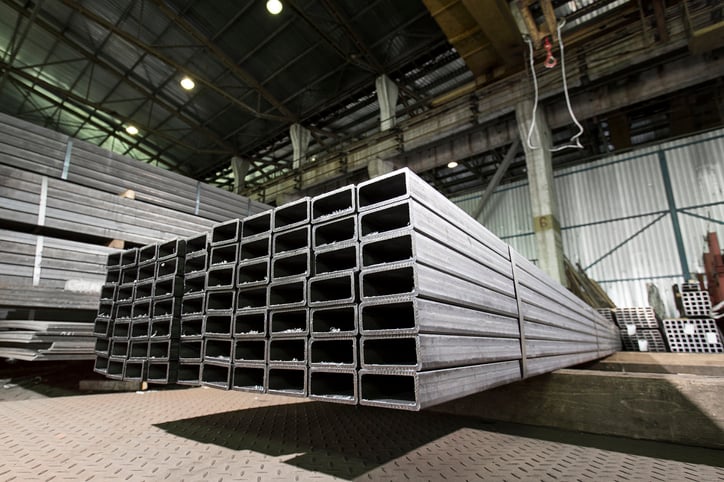 What’s the difference when it comes to hot formed vs. cold formed hollow sections?

By most appearances, not much.

As both types of hollow sections are indeed unique, it’s important to understand their differences when selecting the right type of processed steel for a project.

When evaluating hot and cold formed hollow structural sections, there are three main considerations to keep in mind:

Determining which type of hollow section is right for your project starts with how each is manufactured.

Hot formed hollow pieces are created by superheating sheets of steel up to temperatures of up to 1,700° F, making it more malleable. While heated, the steel is processed through a series of rollers to form it into a desired shape.

Hot formed steel is cooled slowly back to an ambient temperature. While cooling, the steel reconfigures to have a consistent microstructure.

The key difference between is that their shaping doesn’t occur until after the steel is cooled.

The additional strength is attributed to strain hardening, which increases cold formed hollow sections’ resistance to bending by up to 20%.

While able to withstand great amounts of stress, hot rolled steel products are more apt to bend if there are any impurities within the metal.

Though hot formed steel requires extreme heating, it’s much easier to shape and work with once it reaches a suitable temperature. This reduces production and labor expenses.

The Pros: As heated steel is much easier to shape, hot formed hollow steel sections require less processing. The heating process also eliminates a steel sheet’s inconsistencies or internal stresses. Having undergone intense processing, hot formed hollow sections stand up to stress from additional fabrication, such as welding and riveting.

The Cons: Hot formed hollow sections shrink somewhat during cooling and corners become rounded, making tolerances a concern. In addition, the cooling process causes surface scaling. Because of its formability during processing, it’s also difficult to maintain a precise thickness along an entire length.

The Cons: With more additional steps in production, cold rolled steel pieces take more effort and time to produce. Because of its rigidity, cold rolled steel faces shaping limitations -- though your manufacturer’s skill level is also a factor. During shaping, the steel is stretched, making cold formed hollow sections prone to corner breaks.

Selecting the right type of steel hollow section has a big impact in the successful completion and functionality of a project.

Understanding the differences between hot formed vs. cold formed hollow sections saves time, money and effort. To learn more about creating a tube design that’s manufacturable and effective in the field, download our free e-book below: